With awe-inspiring forests and an amazing landscape, it’s no wonder we’re known as “Alabama the Beautiful.” You may think you know about Alabama’s natural wonders, but you may be surprised by some of the bizarre and beautiful landscapes you may otherwise not have considered.

About ten miles off the coast of Mobile, Alabama, lies an ancient world buried at sea. A primeval forest was only recently discovered just off Alabama’s coast. Researchers believe Hurricane Katrina’s turbulent waves and harsh conditions uncovered the cypress forest and allowed marine biologists and other scientists to explore a previously unknown part of Alabama’s natural history. 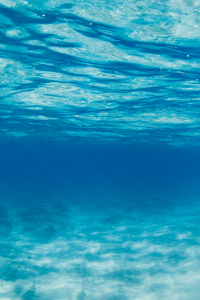 When scientists first discovered the underwater forest, the predicted age of the trees was severely underestimated. In fact, while initial reports stated the trees were between 8,000 and 12,000 years old, scientists now believe the forest is at least 50,000 years old and may be as old as 80,000 years. Divers and scientists explored the area and noted that some logs measured 8 feet in diameter, illustrating the immensity of the ancient forest.

Prior to Hurricane Katrina, the forest was preserved underneath the seafloor. Now that it has been exposed, scientists must work quickly to learn as much as they can about the area before the trees and stumps begin to decay. The Earth had a very different climate 50,000 years ago, and sea levels were much lower. The underwater forest provides important evidence, showing that Alabama has risen between 60 to 120 feet over the last 50,000-80,000 years.

There are a number of important impacts the discovery of this forest has had on the scientific world. One of the most crucial is the possibility that it will help us understand climate conditions in the Gulf Coast over the past several millennia. Depending on a variety of factors, such as precipitation and temperature, the trees’ rings will appear differently. By obtaining samples from the trees, scientists will learn about the conditions the Gulf has experienced over time. No previous scientific research has been able to show Gulf conditions that far back.

Alabama is home to many natural wonders, but none of them are quite as spectacular as the recently discovered primeval forest off the coast. It is hard to believe that just sixty feet below the Gulf waves and ten miles from Mobile lies an ancient cypress forest at least 50,000 years old. The forest serves as a reminder of the delicate eco-systems supported by the Gulf Coast and Alabama and the importance of preserving our environment to keep Alabama beautiful.

Come see the area for yourself. Contact us today!