ORANGE BEACH, Alabama — A restriction on dogs at two popular islands that attract hundreds of Gulf Coast boaters on weekends and holidays is causing a stir among locals as the City Council grapples with complaints and a need to enforce its own laws.

At the heart of the matter is the growing use of Bird and Robinson Islands near Perdido Pass by boaters and some who let their dogs run loose.

While chatter flooded social networks Tuesday about the council voting on a dog ban at its meeting that night, the topic was not on the agenda and it didn’t need to be as laws are already in place that prohibit dogs on the islands, although they haven’t been enforced up to this point. A handful of people did show up at the meeting, however, to voice their concerns and an hour-long discussion ensued about dog restrictions on the islands and how that move is not welcome news to responsible dog owners who enjoy that luxury.

Some possible solutions that were broached by residents and city officials included the possibility of fencing off the southern portion of Robinson Island for dogs, and a Gulf-front dog beach, the more likely solution, which city staff have discussed with the state in the past. There was also mention of Gulf State Park officials looking at opening a dog area along Lake Shelby if there’s enough interest in pursuing it.

Mayor Tony Kennon said the issue on the islands has been growing for years and it came to a head Memorial Day weekend when an unprecedented number of boaters flooded the islands with a large number of dogs roaming free.

“Something has been happening since I’ve been mayor and that’s irresponsible owners letting their dogs run wild,” Kennon said at the start of Tuesday’s meeting when questioned by a resident. “We have done everything that we can do to live and let live. We turned our heads; we tried to be nice but there comes a point when there’s enough complaints that you have to take action and unfortunately our action is already defined for us.” 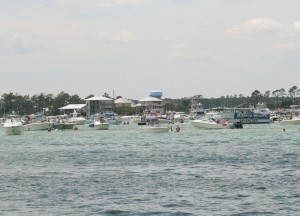 Boaters crowd around Bird Island during Memorial Day weekend on Sunday, May 26, 2013, in Orange Beach, Ala. Due to the overcrowding of Bird and Robinson Islands and complaints about dogs running amok, the Orange Beach Police Department is poised to begin enforcing a long-standing but overlooked no-dog rule on the islands, according to Chief Billy Wilkins. (Marc D. Anderson/manderson@al.com).

That action is enforcement of an animal ordinance that has been on the books for more than 20 years, and a dune protection ordinance, both of which strictly restrict dogs on the city-owned Robinson Island, and state-owned Bird Island, which is within city limits, according to Police Chief Billy Wilkins.

Kennon said he saw the problem firsthand as he spent time on the islands over the past holiday weekend, and after a dog defecated a few inches away from him, he decided to survey people there.

“I have nothing against it, but I’m telling you, the folks on that island that don’t have dogs don’t want your dog around it,” Kennon said. “They don’t. If they did, they would have their own dog. Not that they’re not dog lovers, but I made it very clear when I was out there this past Memorial Day weekend to ask as many people as I could. … They’re fearful for their kids. They didn’t like the feces and urination issues. The didn’t like dogs running up and getting into their food. It was a problem.”

Kennon said he did talk to responsible dog owners who were very upset, but said it only takes a few to ruin a good thing for the majority.

“The last thing anybody up here wants to do is pick a fight over someone’s dog,” Kennon said. “Because I’m going to tell you what, it’s like messing with the Garden Club. You just don’t do it because people love their dogs, their animals, and they see them as an extension of their family, and while I appreciate and respect that, it still puts us in a no-win position.”

Resident Ross Easter spoke about his displeasure with the city’s move and hopes a compromise can be made to allow dogs on Robinson Island.

While city officials said they have their hands tied with Bird Island since the state has firmly requested that dogs be prohibited, there seemed to be a possibility that something could be worked out on Robinson. A potential roadblock, however, is the fact that the city bought the island in 2004 with the help of a $2 million grant from the National Oceanic and Atmospheric Administration, and if the proper protective steps are not taken, the entire island could become off-limits to not only dogs, but people, too.

“No good deed goes unpunished,” Councilman Jerry Johnson said. “So we have been lax for years. It’s always been on the books, no dogs on those islands. We’ve been very lax. That good deed is now going punished because people in excess are making it impossible. If it continues, even if there’s not dogs, the next move is to prohibit anybody on those islands at all, and we can do that, but we don’t want to do that. But we’ve got to be reasonable.”

A key player in the preservation of the islands, which serve as nesting grounds for shore birds such as least terns, is the Islands of Perdido Foundation. The nonprofit, made up of members of environmental groups and agencies at the city, state and federal levels, was formed to help management and preserve the public land in Terry Cove.

Councilman Jeff Silvers, a member of the foundation, said the majority of the people who use the islands probably have no idea what it has taken to preserve them.

In the late 90s, Robinson Island was slated to become a 38-home development, but that project fell through in part because the land was deemed to be one of the last remaining heron rookeries along Alabama’s coast. Unfortunately, the developer razed most of the established trees on the property, and today, the Islands of Perdido group is fighting an uphill battle to re-establish native trees and heron nesting. In the last two decades, the once 14-acre Robinson Island has eroded to 12.

“We’ve gotten a lot of federal assistance through grants and such to keep it as pristine as it is,” Silvers said of the islands. “We went back out there in February, to Bird Island, and put up all kinds of fencing and such like that for the nesting birds. I think when people go over that bridge or when they go out to Robinson Island they don’t know what’s behind the scenes to get where Bird Island and Robinson Island are at today.”

Silvers said the foundation endorses banning dogs on the islands in light of ongoing preservation efforts, but at the same time keeping it open to recreational activities.

Other residents on hand at Monday’s meeting included two with a petition signed by 230 people who want leashed dogs allowed on the islands. In looking at the list after the meeting, Silvers said only about 20 were local residents.

Kennon said he was open to other ideas but said the chances are slim that dogs will be allowed on the islands because enforcing any rules will prove to be difficult for police.

“I think we’re all open to any possibilities, but right now, I just think the window is very small,” Kennon said. “I think the greatest opportunity is getting with the state and getting a state beachfront dog park.”